How Do I Get My Husband to Listen to Me? 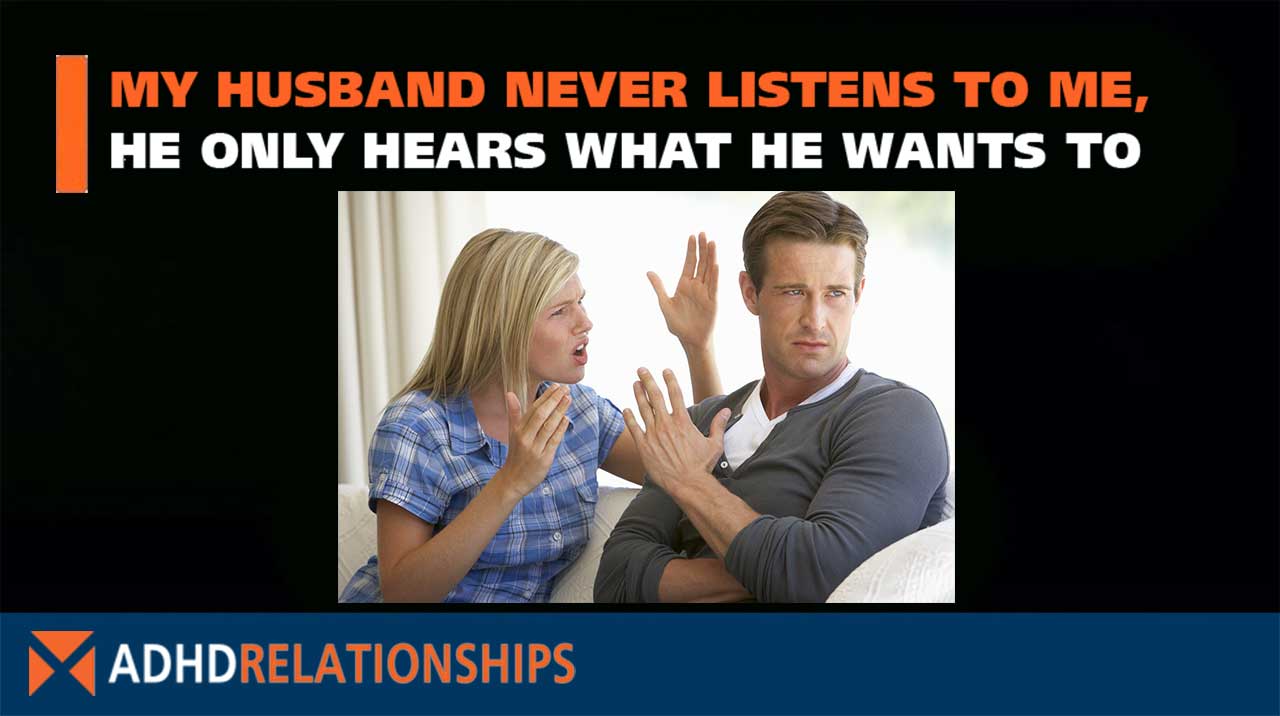 My Husband Never Listens to Me, He Only Hears What He Wants to Hear

“I’ve just learned to keep things short and sweet whenever I speak to my husband”, Jess told me in a counselling session. “I realized long ago that he tunes out so quickly, I have to be pretty fast at telling him things. Instructions, that is. I never get to just talk to him like I do to my girlfriends.”

“How do you feel about that?” I asked Jess. “Does that frustrate you?”

Well, not frustrated, Jess replied, because that’s just the way it is with him. I’ve learned to live with it. But I do feel sad. Because at the beginning, we used to talk all the time, either on the phone or when we got together. Actually, that was one of the things I loved about my husband Ash, the fact that we could talk and communicate and I felt that he listened to me. Back then, he listened and responded to what I was talking about, but now he never even seems to hear what I say.”

You experience the change in communication as a loss

“Interesting that you can identify that you feel sad,” I said, “because that means you experience the change in communication as a loss. Have you ever told him this? Do you tell Ash your feelings?”

“I’ve tried to,” Jess answered. “But then we usually end up in a fight, because he thinks I’m criticising him, when all I’m doing is telling him how I feel. I can talk to my girlfriends about it, and they get it. Some of them have a similar issue but I think of all our couple friends, our communication seems to be the worst.”

“Give me some further examples,” I prompted Jess.

After a moment’s thought, she continued. “Well, we also argue about who said what. For example, I will tell him something, about being asked over to a friend’s place for a BBQ say, and when I remind him on the day, he will say he knows nothing about it and why didn’t I tell him? I get so mad because I DID tell him. He swears black and blue that I didn’t. I’ve often said to him I should use my phone to record everything I say so that I can play it back and prove to him that I told him.”

“You know, once I told him about a surprise party my girlfriend was arranging for her husband’s 32nd birthday. I even told him the details of how she was going to arrange the surprise aspect. We commented that it really would be a great surprise because it wasn’t a milestone birthday. I knew he was listening that time, because he asked about some details like when and where, and who we would get to babysit our kids on that night so we could attend. It was great.

But then he ruined the surprise when he met up with Steve at the gas station the following weekend, and told him we were looking forward to his birthday bash. I was so embarrassed and upset. To this day, he defends himself by saying I never told him it was a surprise.”

Karen’s assessment – Why Jess’s Husband Is Not Listening To Her:

This communication issue was becoming problematic. Initially people can laugh about a MIS-communication, but after a while there is sadness and pain, because relationships are built on correct and respectful communication.

There were several scenarios that I could see. Either:

Whenever you find there is a communication breakdown in your relationship, observe your communication style closely for a few days to see if it really is your partner that is causing the problems. It may be you! (But that could be a good thing, because if the problem lies with you, then you can do something about it!)

Yes, you can get your husband to really listen to you with just a few tips and techniques on how to communicate differently.

What You Can Do to Improve Your Communication in Your Relationship

If you want that know-how to improve your communication in your relationship, you’re not alone …

I’ve helped many women learn how to have meaningful conversations with their husbands. Conversations where you can talk and know that he is really listening.

Make an appointment with Karen today… and learn more about how to get your husband to listen to you. You’ll learn tips and on how to fix this problem of your man not listening like you need him to.